Video: How to Pack Camping Gear for 2-Up Motorcycle Adventure

This quick video shows how to pack for two people camping on a motorcycle. By using various modular components from Giant Loop’s Adventure Proof Packing System – and high quality outdoor gear – motorcycle touring 2-up can be fun, safe, comfortable and self-sufficient. 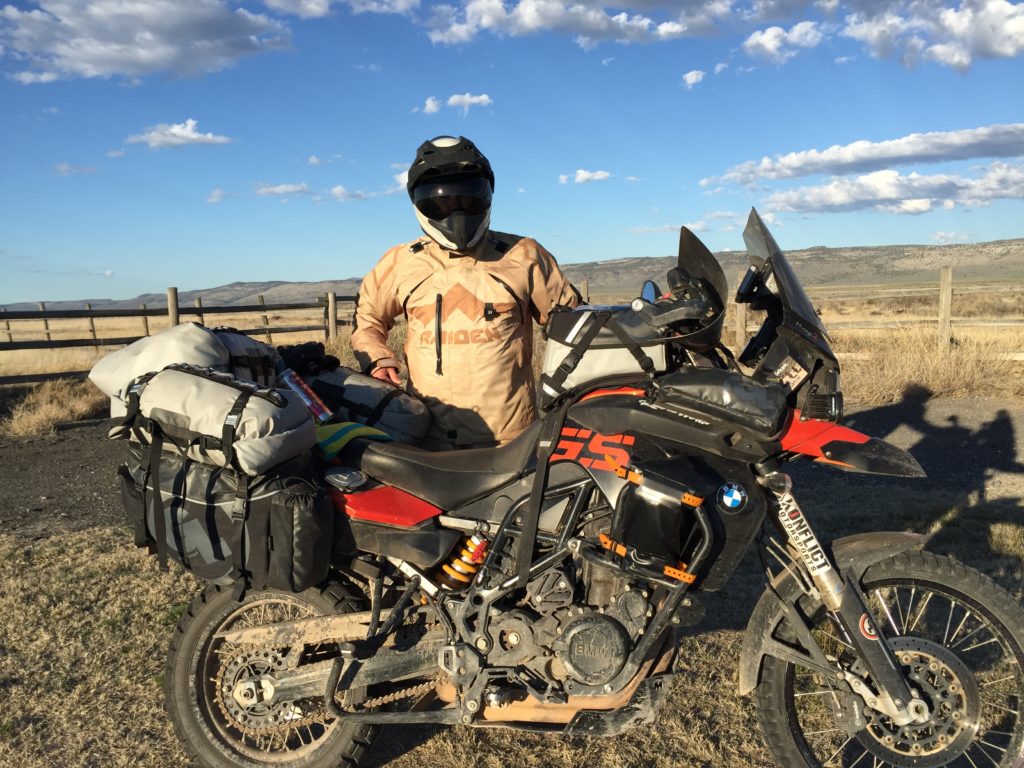 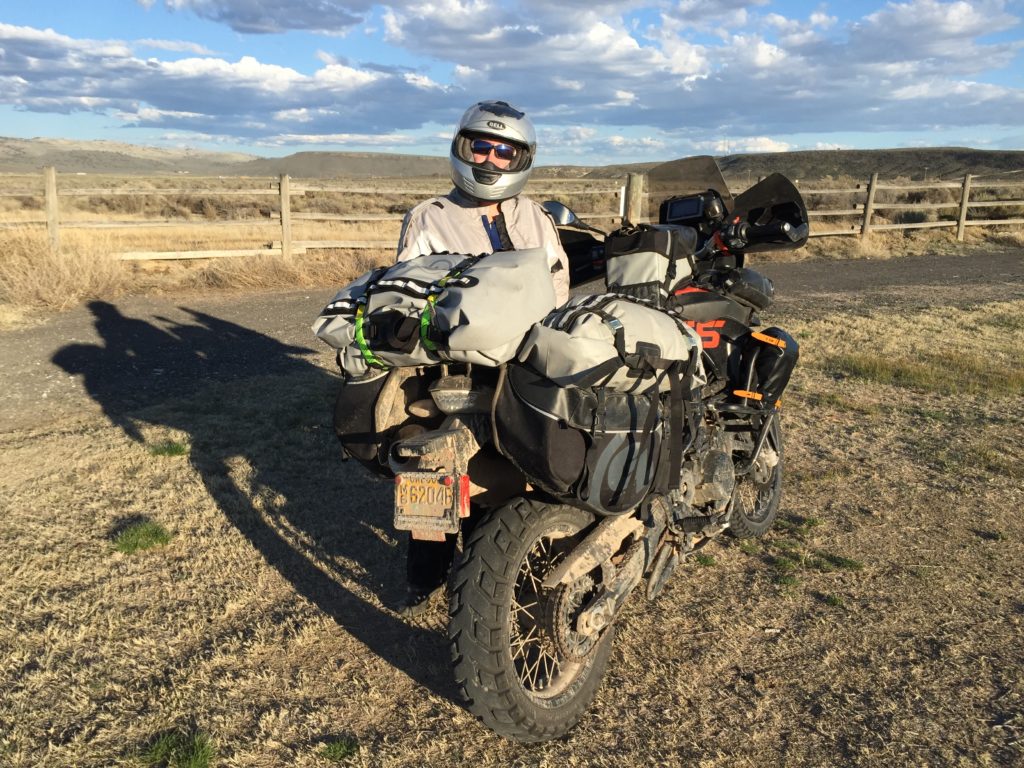 TIP: Passenger should wear a helmet with no visor fro 2-up motorcycle travel and camping! 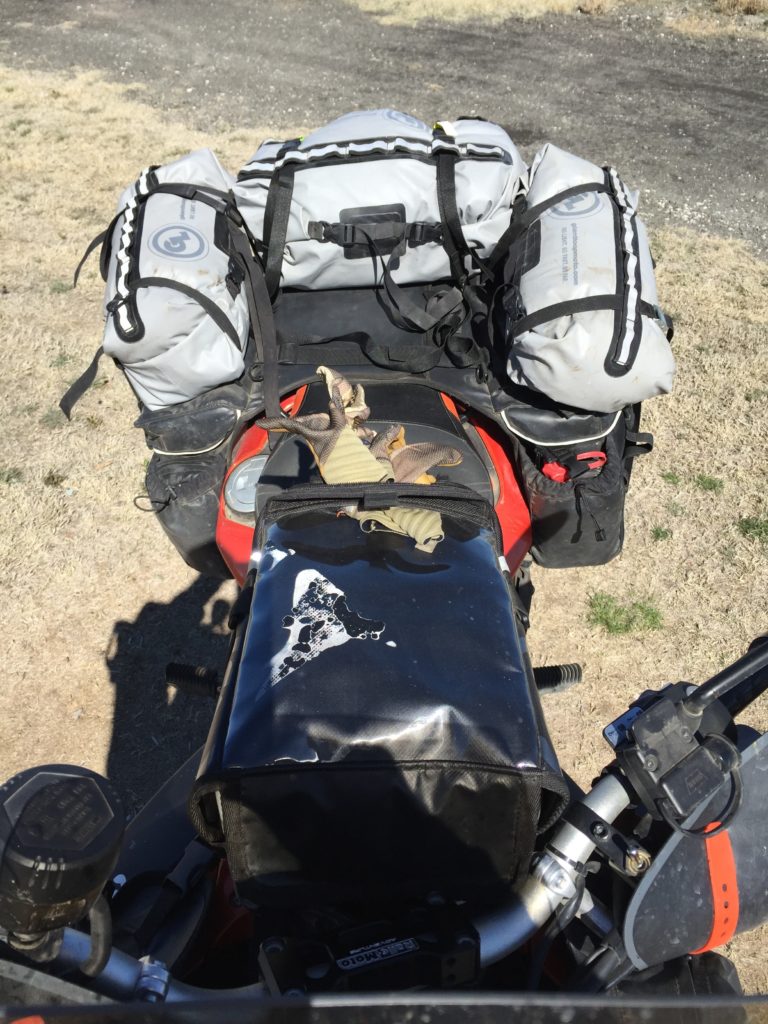 Many small compartments are better than fewer larger ones, helping keep gear organized and easily within reach without extra unpacking and re-packing. Have any tips to share with us? Post them in your comments here! 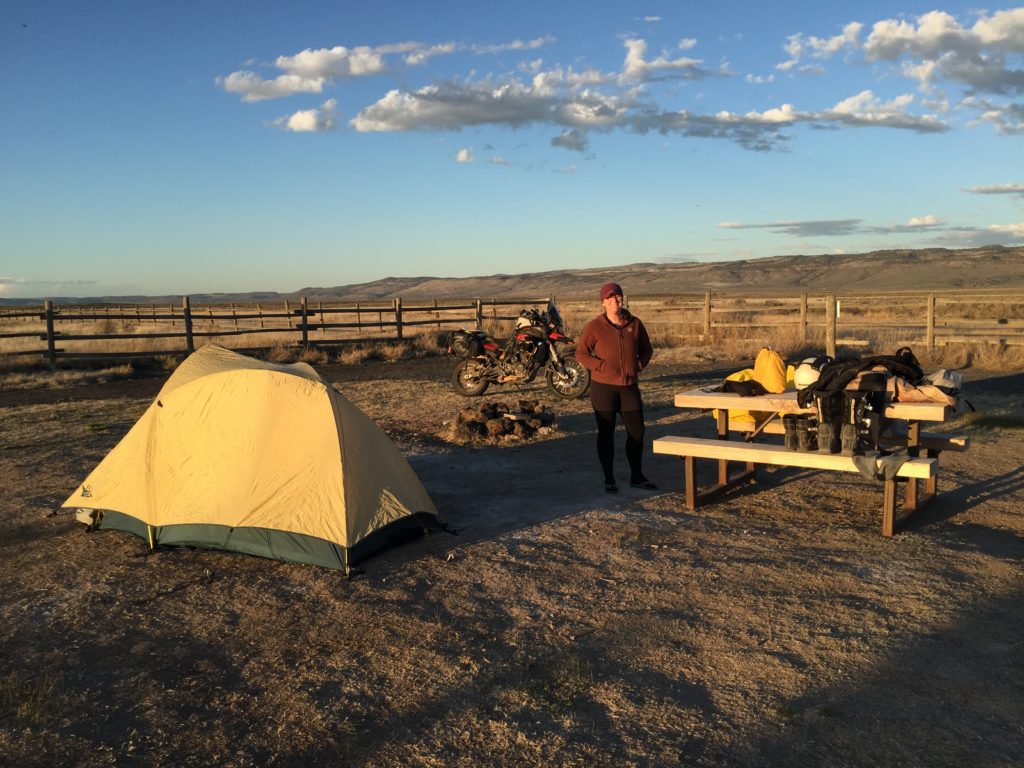 Hello I bought your Great Basin Saddlebag, couldn’t be happier with it.
Do you sell or recommend a quick release system?
I have the bag snug and fitted to my bike. I’d like be able to get under the seat or take the whole bag indoors with me without undoing all the compression straps.
Any suggestions?

ANSWER
Compression straps aren’t intended for mounting. On the Great Basin Saddlebag and Siskiyou Panniers, the two side anchor straps and 1-3 rear anchor straps should do the trick.

On the rear anchor(s), you can use our Pronghorn Straps for a clean quick-release solution: 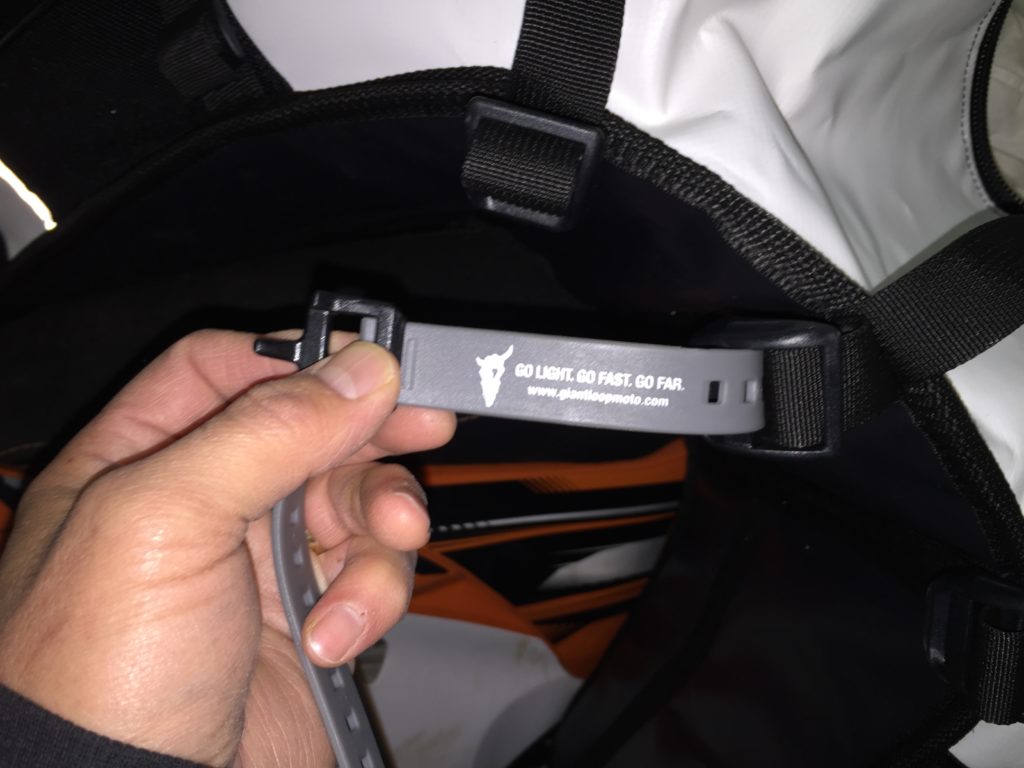 Thank you Powersports Business for recognizing Giant Loop’s Tracker Packer ruggedized holster for SPOT Gen3 as a?top 50 new product in the powersports industry with a “Nifty 50” award. We are especially pleased to share the honor with the Kurt Caselli Foundation, with gratitude to Quinn Cody for the opportunity to collaborate.?A portion of all Tracker Packer sales are donated to support the Kurt Caselli foundation’s mission of making off-road riding and racing safer.

Cory Rowden, Kiwi owner of and guide for BoliviaMotors, rode his Honda XR650R through Bolivia, Peru, Colombia and Brazil last fall with Giant Loop’s Coyote Saddlebag. Here are some of his pics and feedback:

?I?ve just returned from a month riding in Bolivia, Peru, Colombia and Brazil during which I used a Giant Loop Coyote bag strapped to the back of a Honda XR650R. We rode over 6000kms and had a fantastic time on a mix of tarmac, cobblestone, dirt and mud road in mixed conditions including rain, sun, cold and extreme heat. We crossed the Andes mountains, floated down the Amazon river and rode BR319 ? officially Brazil?s worst road ? through the heart of the Amazon rainforest. The Giant Loop Coyote gear performed flawlessly and I could not have chosen better equipment. It was perfectly suited to a bike of this kind with limited mounting options. The bag never shifted while riding, nor did it get in the way even during spirited riding off-road. Not a single problem or complaint ? it kept my gear clean and dry through the varying conditions we were faced with and it was also easy to load and unload at the beginning and end of each day. I can and will heartily recommend Giant Loop gear to clients and friends.? 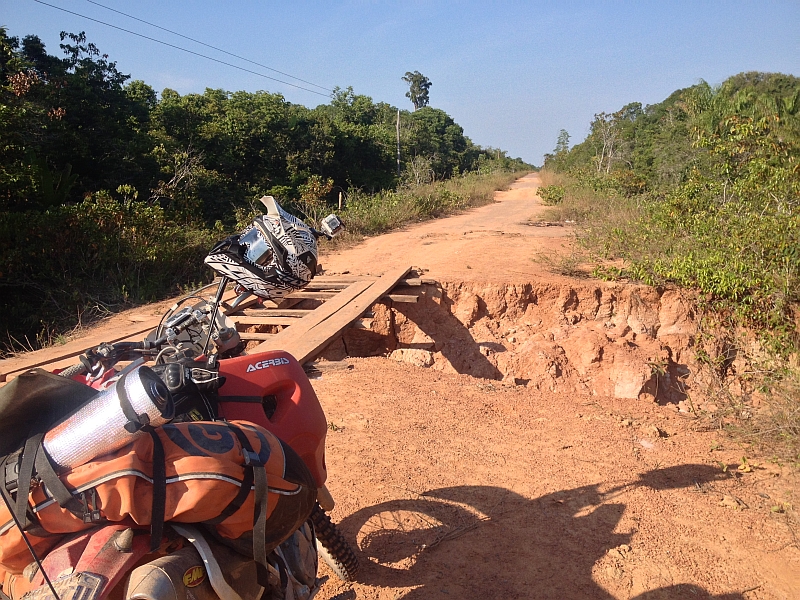 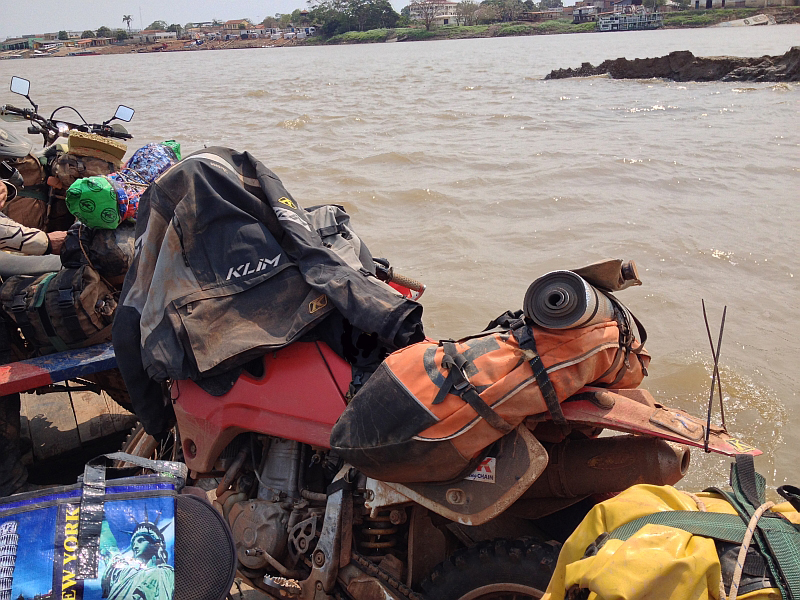 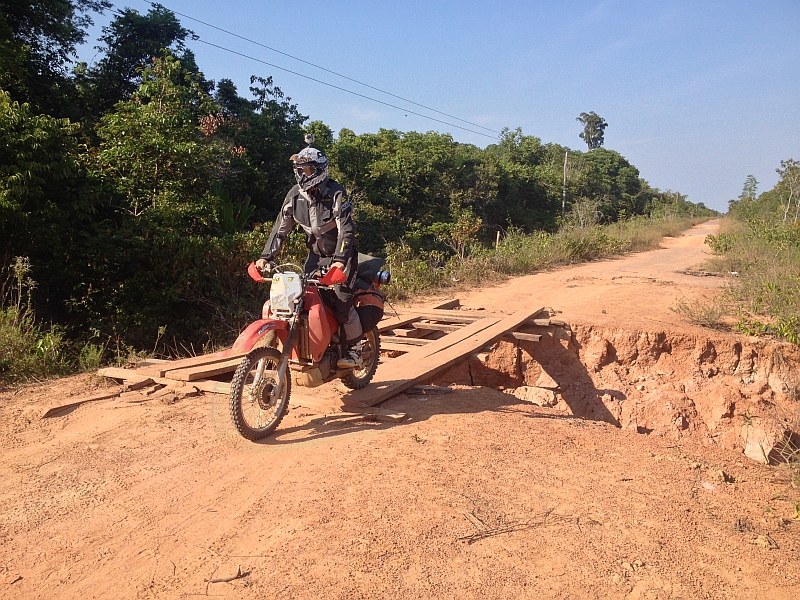 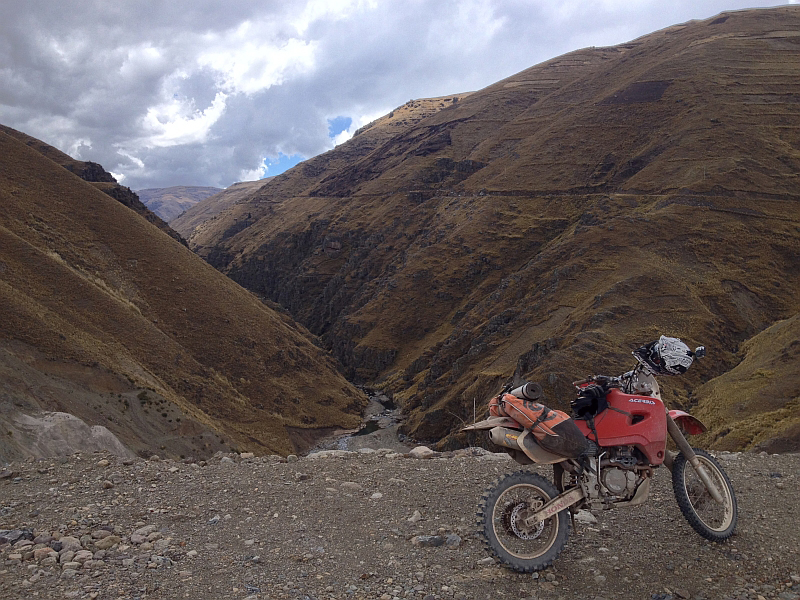 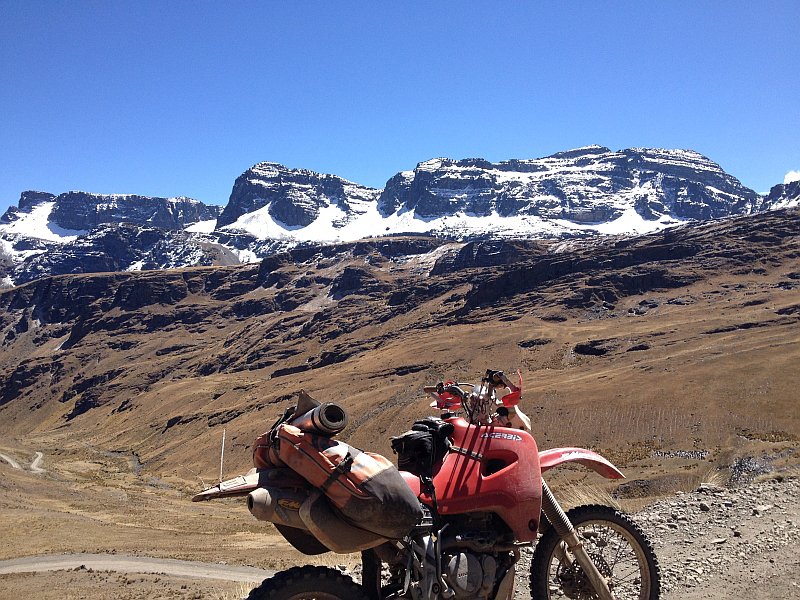 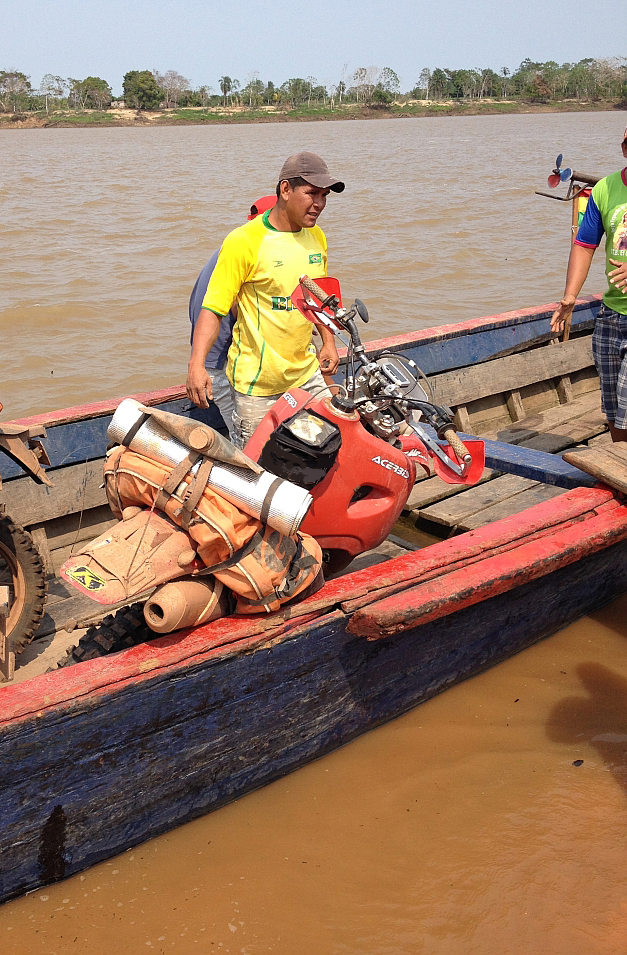 Thanks Dirt Rider magazine for the “Long Haul Wrap-Up” on the 2014 Kawasaki KLR 650 with Giant Loop’s Siskiyou Panniers – we’re glad to see you’ve given them a proper thrashing and thorough test!

“Over the past year our KLR has been in the snowy Sierras, the dusty Baja desert, the jeep trails of Orange County, and the (scariest of all) the twisted maze of crazed motorists that is the Southern California freeway system. After all of the silt, sand, mud, nails, rocks, and texting motorists, this is how it fared.”

Great long-term test! And if you would like to avoid the “scuffed-up side panels from the panniers,” simply install Giant Loop’s Vinyl Protective Film before riding 2,000+ miles with the Siskiyou Panniers.

Using a slightly longer bolt to replace the bolt connecting the side panel to the subframe on the KTM 500 EXC, the new Giant Loop Mount makes a handy anchor strap connection for the MoJavi Saddlebag and Coyote Saddlebag, keeping the webbing well away from hot exhaust.

Here’s how to install Giant Loop’s Kiger Tank Bag, Fandango Tank Bag or Diablo Tank Bag on motorcycles – like the BMW GS models or the Honda CB500X shown in the video – that do not have exposed frame rails. By removing the seat, installing the Tank Bag Harness, putting the seat back down and tightening, the mounting is clean and tidy! #golightgofastgofar

Not sure which Giant Loop product?is going to best suit your needs? CLICK HERE TO DOWNLOAD A PDF Comparison Chart of the 2015 Giant Loop Moto Collection! #golightgofastgofar 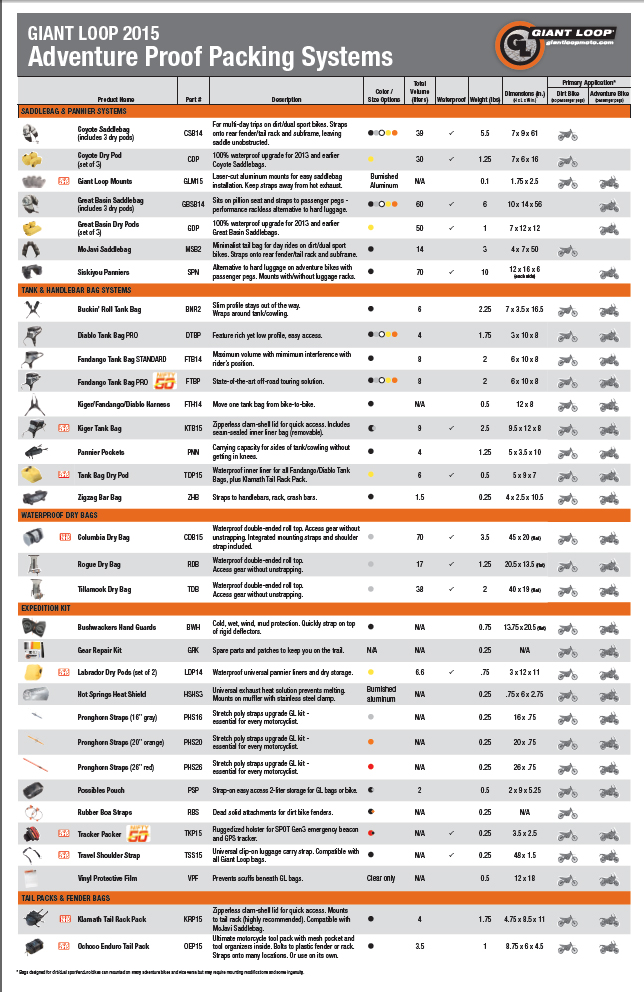 Local rider Geoff’s Suzuki DRZ400 is about as nicely set up as any we’ve seen, with Trail Tech Voyager GPS, Race Tech Suspension, full Yoshimura Exhaust and aftermarket carb. Here are some details about his MoJavi Saddlebag installation using the new Giant Loop (GL) Mounts, which will work great with the Coyote Saddlebag and Great Basin Saddlebag, too. #golightgofastgofar 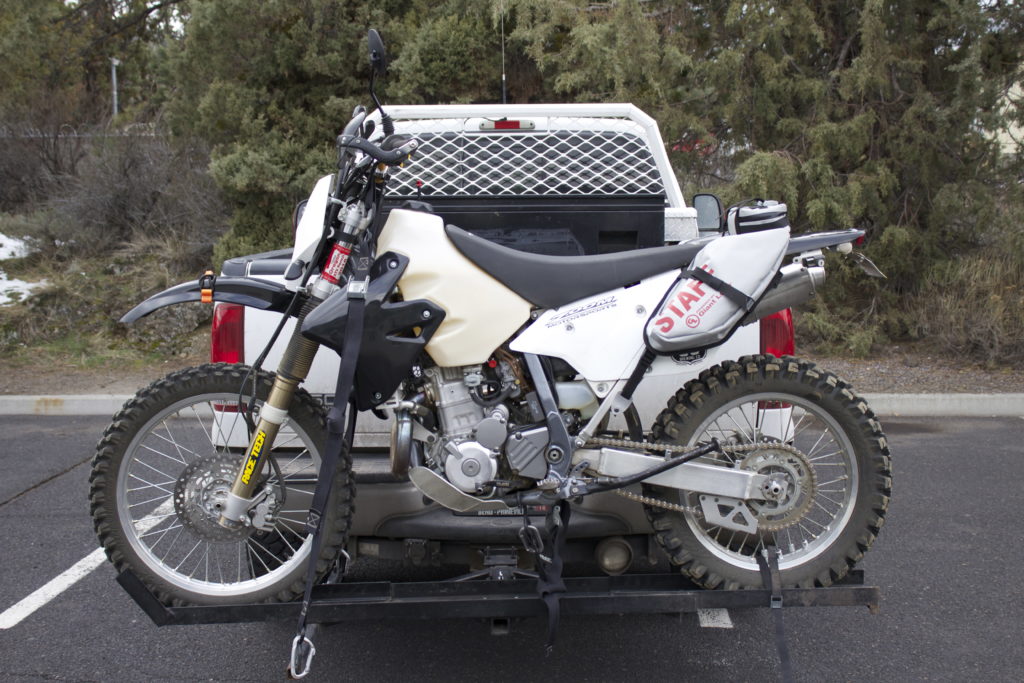 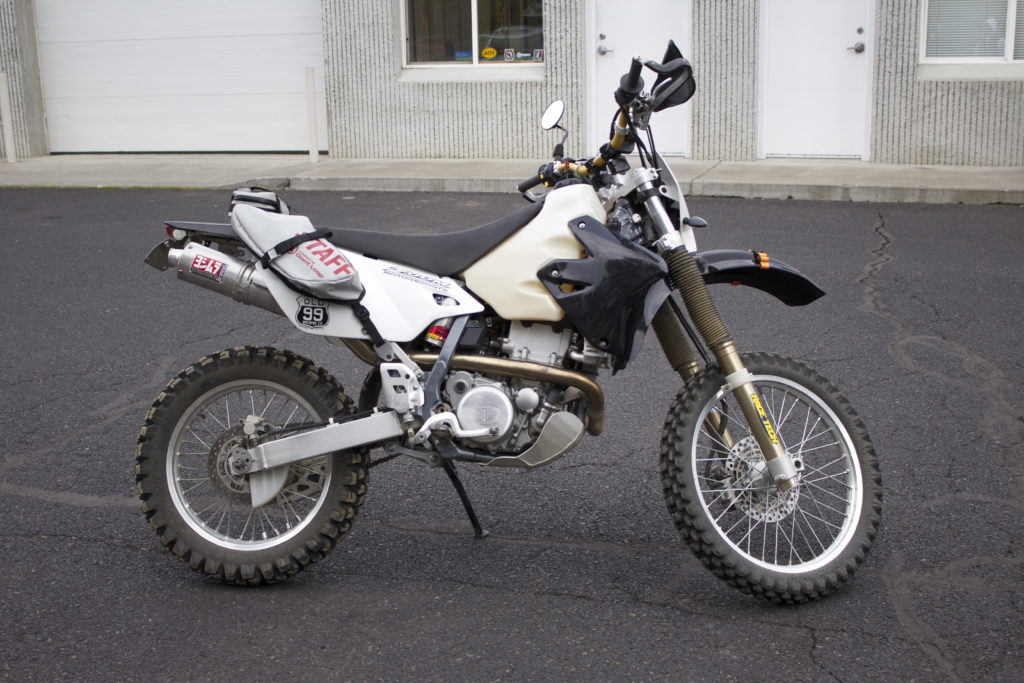 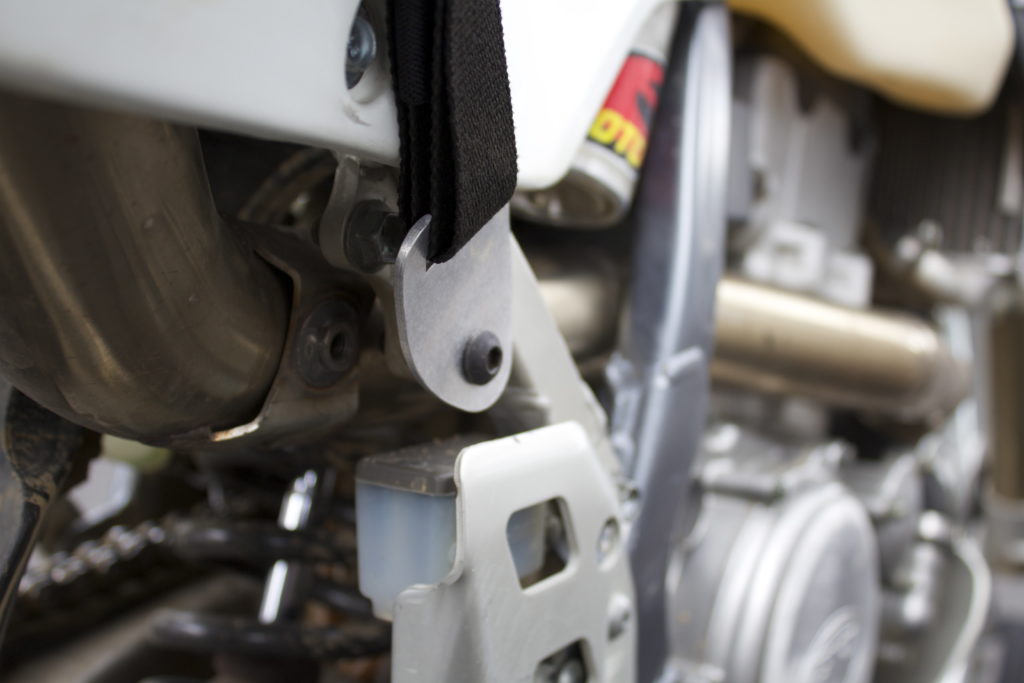 Geoff’s using a small spacer to set the Giant Loop GL Mount away from the passenger peg’s other bolt and to give plenty of room to work when anchoring Giant Loop Saddelbags and soft luggage to dirt bikes and dual sport motorcycles. 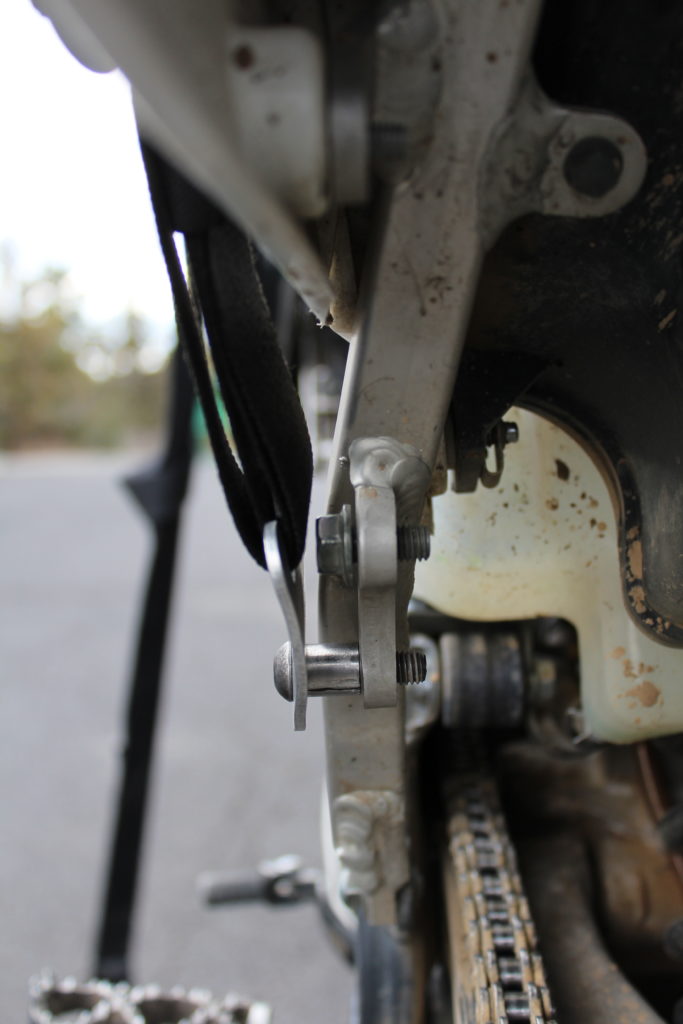 Giant Loop’s GL Mounts make a clean installation, with straps kept away from boots on both sides. 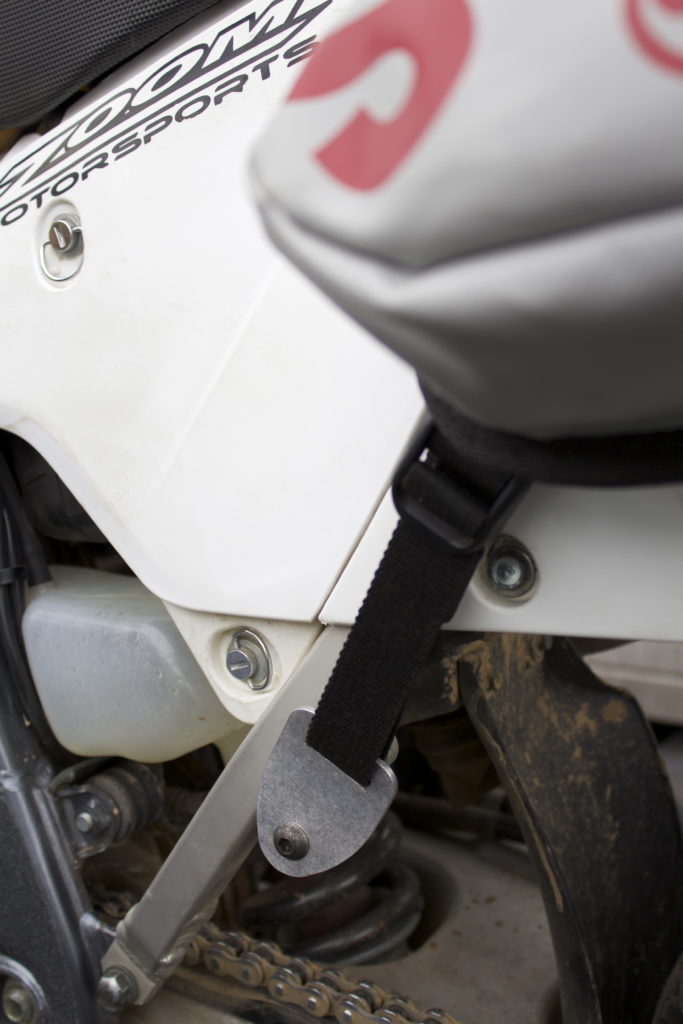 Since Geoff leaves the MoJavi Saddlebag mounted on his Suzuki DRZ400 all the time, he’s using a hard-mount bolt-on installation (which can also be done with Giant Loop’s Coyote Saddlebag). 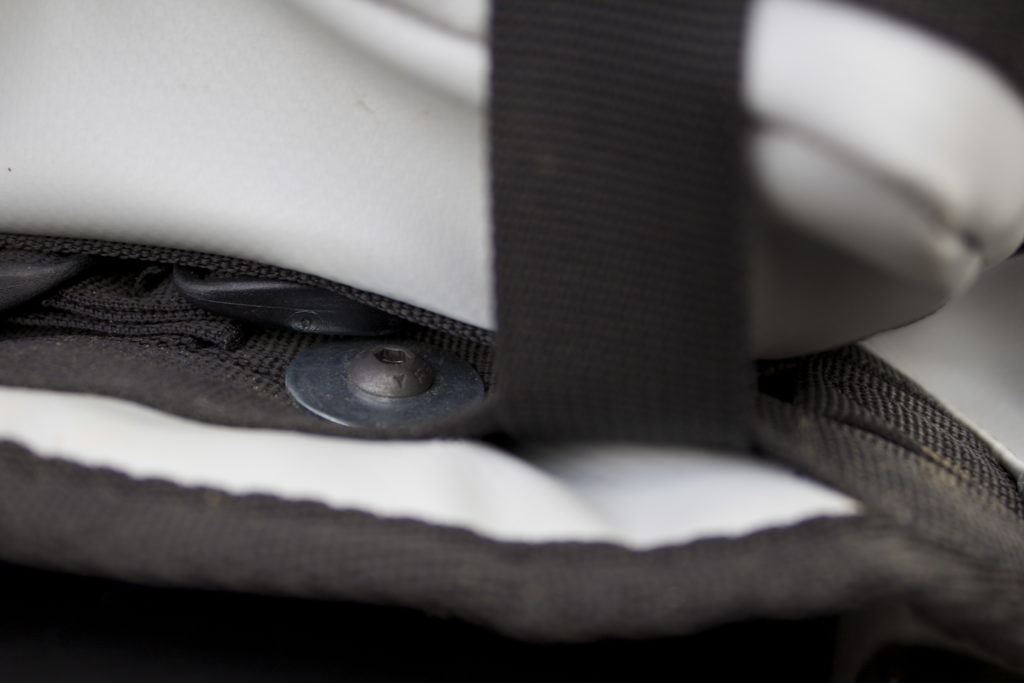 Two bolts through the dirt bike’s rear plastic fender and metal fender brace, a couple of washers and nylock nuts, and the Giant Loop Saddlebag is not coming off. Period. 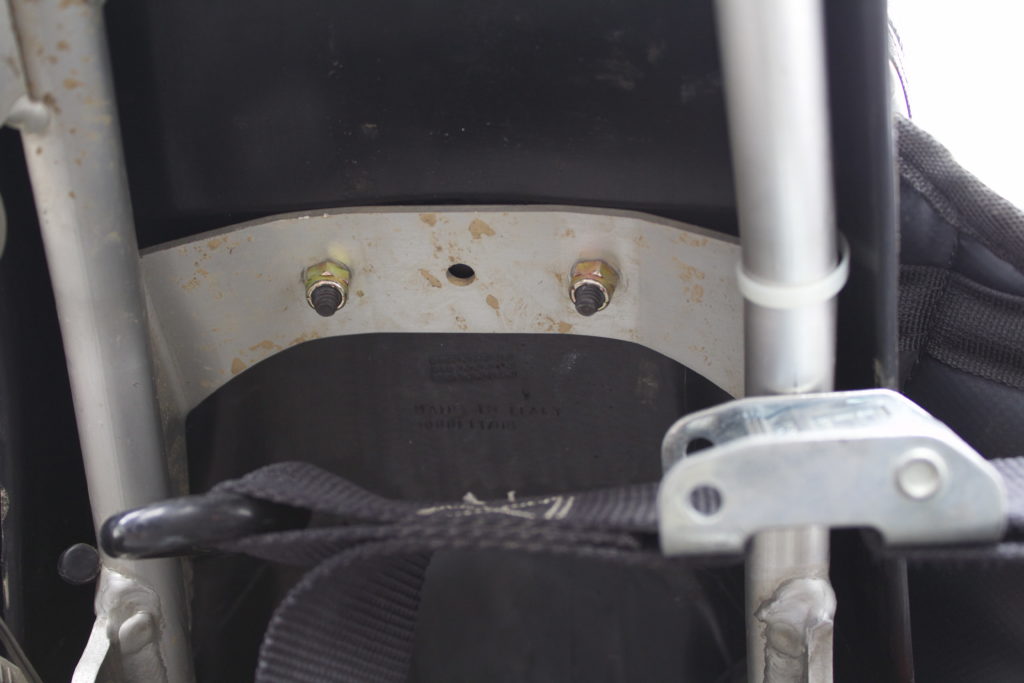 Geoff secures the zip-off sleeves of his riding jacket to the front fender with Giant Loop’s Rubber Boa Straps. 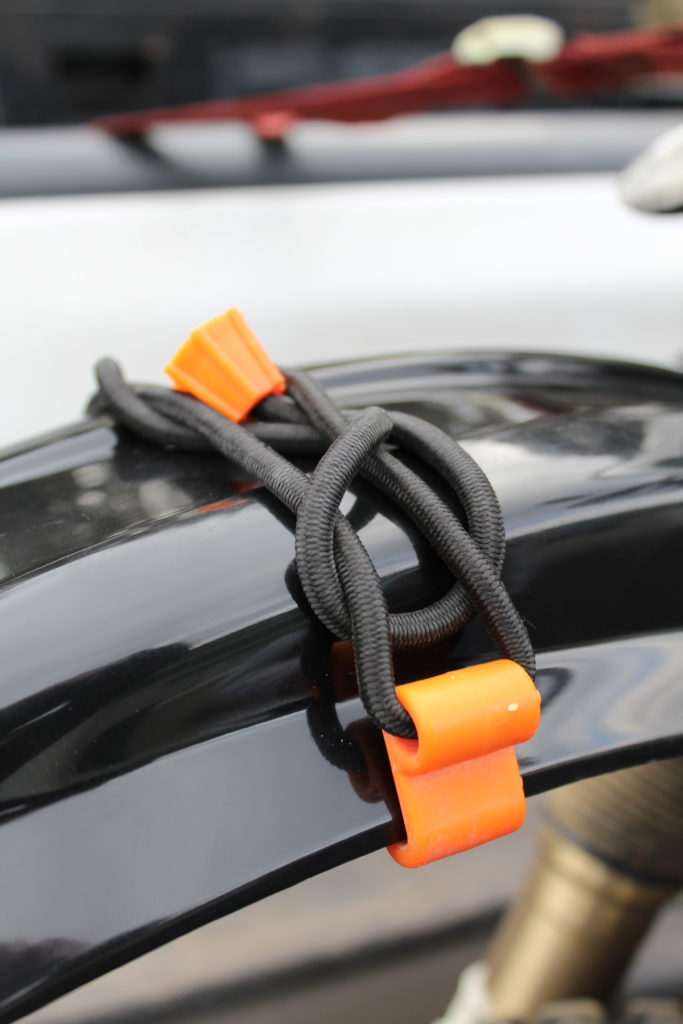 Thanks XLADV.com for the review and especially for mentioning zipper care (that’s one reason why your Fandango Tank Bag has served your well for so long)! The new Giant Loop Tank Bag Dry Pod fits all models of the Fandango and Diablo Tank Bag. Check out the new Fandango Pro Tank Bag with integrated electronics pass-through, concealed document pocket, bigger map pocket, rider-facing outside mesh pocket and more rider-friendly features. #golightgofastgofar

Free US Shipping on $39+ orders Dismiss