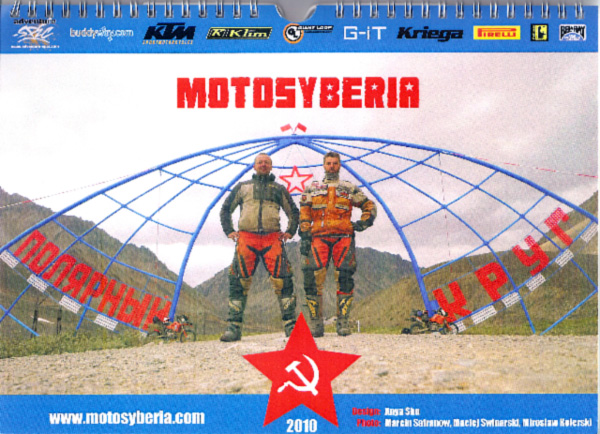 It made my day when the mailman delivered a package from Poland containing a disc full of photos and a copy of the 2010 MotoSyberia calendar. Motorcycling is a world of extremes, and among the extreme MotoSyberia pretty much leaves all other contenders eating their mud and dust. These guys do things on motorcycles most people would simply call crazy. For this reason, we were really excited when Mac at MotoSyberia contact us about sponsoring their 2009 trip and equipping their bikes with our Giant Loop Saddlebags (this was before we introduced the new, improved Coyote Saddlebag). Our saddlebags, they told us, were the only product up to the task of the expedition they had planned. Mac?s sense of humor is straight out of the movie Spinal Tap ? here?s how they describe the expedition:

?MotoSyberia 2009 ? extremely mental expedition to the unknown. First successful attempt to get to Anadyr overland in summer. The laborious southern route turned out to be too difficult. After surrender and many mental problems they successfully got through the northern route to the capital of Chukotka- Anadyr. MotoSyberia 2009 is about achieving the aim at any cost. MotoSyberia Reactivation was lead by the prince of the darkness, satan himself. The route: 6666 km in 66 days, Magadan, Omsuchan,almost Evensk, Magadan, Seymchan, Anyusk, Bilibino, Evgekinot, Anadyr. Riders: Maciej Swinarski, Miroslaw Kolerski, Grzegorz Sadowski. Bikes: KTMEXC400?

We can?t wait to see what these guys come up with next ? and to put Giant Loop gear to the ultimate test! Take a look at the MotoSyberia website ? if you dare . . .