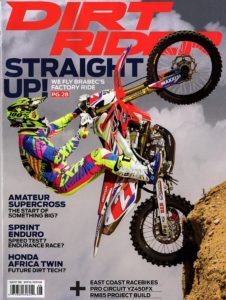 Thanks to Dirt Rider Magazine‘s Seiji Ishii for the kind words regarding our 38-liter, waterproof Tillamook Dry Bag. His review published in Dirt Rider Magazine’s August 2016 issue confirms the strength, versatility and reliability of one of one of our most popular double-ended waterproof bags. Ishii points out that the Tillamook Dry Bag can be used in more situations than just the back of a motorcycle, including canoeing, kayaking, and rafting adventures (as well as snow mobiles, snow bikes, ATVs, UTVs and 4x4s!). The rolling closures at either end and the radio-frequency welded seams prevent water from entering and damaging contents – and our double-ended design provides easy access to gear from both ends without unstrapping the Dry Bag. “Think of it as a tube with a waterproof roll-top closure at both ends. This allows access to the contents from either side of the bag, on or off the bike. It also allows extreme adjustability to the volume of the bag.” Ishii used the Giant Loop Tillamook Dry Bag during a weeklong adventure motorcycle rally, the KTM Adventure Rider Rally in Crested Butte, Colorado. “The week of riding included trails that were so rough that metal chassis components were breaking on bikes, but the Giant Loop bag remained unscathed. The closures never hinted at opening and all seams and webbing remained unharmed. Rain, creek crossing, and puddles were plentiful, but there was zero water entry.”

In the same issue, Dirt Rider also featured Giant Loop’s Gas Bag Fuel Safe Bladder in its “Gear Bag” section. “Fuel your off-road passion with, what else, extra fuel. This bag-o-gas gives you one extra gallon,” Dirt Rider wrote. The Gas Bag Fuel Safe Bladder allows convenient fuel transport for motorcycles, snow bikes, snowmobiles, ATVs, UTVs and 4x4s, by carrying a gallon of gas in a flexible package. The multi-layer bag is a “go light, go fast, go far” solution for carrying extra fuel on any occasion and rolls up when empty for easy storage.