MY GIANT LOOP EXPERIENCE
by Dave Darcy,  Motorcycle Adventure Dirtbike TV (youtube)
If you’re thinking of doing that big adventure, one of the first decisions you are going to have to make is, are you going to use hard of soft luggage?  When I started adventure riding I initially chose aluminium panniers as I thought they would offer better theft prevention, be laster longing,  and offer protection for gear in the event of a crash.  Within about year all of those preconceptions had been smashed,  literally.  During a ride one of the pannier lids fell off and before I could retrieve it, it had been run over by a truck.  Within a month I had a decent crash and completely destroyed one pannier.  During a crossing of the Simpson Desert I found that the hard panniers would smash the backs of my legs in tough sand going with the potential of me being seriously injured.
LONDON TO SYDNEY, 2012
In 2012, when preparing for our London to Sydney motorcycle adventure on KTM 690s my riding partner, Darren Higginson and I, made a decision to go with Giant Loop soft luggage.   We chose the Great Basin Saddle Bag, a Fandango Tank Bag and two dry bags.   We didn’t know it at the time, but this Giant Loop set up was a fantastic balance between luggage capacity and the need to keep luggage weight low.  The Great Basin was also well away from the rear of the foot pegs with little chance of injuring a riders legs if their feet were pushed back from the foot pegs. The GL gear held up for the 18,000 kilometre trip, with nothing breaking.  In fact when I returned to Australia, I gave my Great Basin and Fandango Tank Bag to a friend, who still uses it to this day.  Giant Loop products are made from a tough material that resists chaffing and deformation.  Last year I came off at around 60 kilometres per hour on a slippery muddy dirt road and the gear took the slide without any damage. 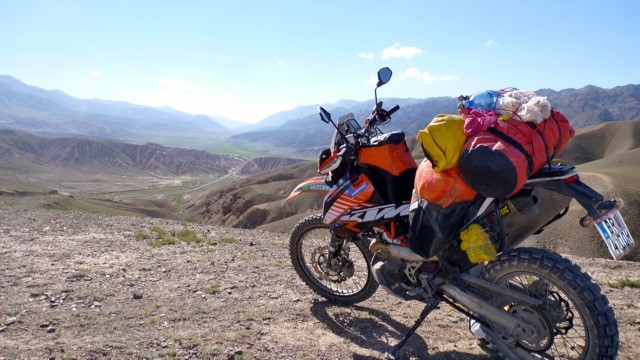 PIC 1: Over looking a valley in Kyrgyzstan with some of the best adventure riding in the world before us. My Giant Loop soft luggage set up for the London to Sydney ride; a Fandango Tank Bag, Great Basin Saddle Bag, and a couple of dry bags.

When I returned to Australia I took on a number of big adventures including an unassisted west east crossing of the Simpson Desert,  later a south north crossing of the Simpson,  a numerous other adventures that clocked up thousands of kilometres including riding the South Island of New Zealand.  For these trips I changed to a set of Giant Loop Siskiyou Panniers.  I found the Siskiyou Panniers allowed me to lower and centralise weight distribution which greatly assisted riding in desert sand.  They also fitted perfectly with my Rally Raid Pannier Racks.  I upgraded to a Fandango Pro Tank bag as it allowed to more easily charge cameras in the tank bag.  I’ve alternated between a Tillamook and Rogue Dry bag.  The dry bags have been amazingly useful due to them being double ended.  If packed in a thoughtful way the bags allow you to very quickly access those things that are important, like warm layers,  tools, or some well earned food.   I generally keep food and clothes one end and spares and tools the other.
Earlier this year I rode 17,000 kilometres in Russia from Samara to Magadan via the Road of Bones on a KTM990.   The bike was waiting for me in Russia for this trip and I flew in with my Siskiyou Panniers, a Fandango Pro Tank bag, and the incredibly useful Columbia Dry Bag as I knew they would fit on the bike and give me what I needed in what I knew would be a challenging environment.  The trip was tough, with thick clouds of dust,  hundreds of kilometres of mud and days of riding in constant rain.  When I finally reached Magadan, I jet washed the bags with my gear in them, and not one drop of water, dust or mud had entered the panniers.  During that ride I came off at speed on a concrete bridge covered in slippery clay.  As accidents go it was at the fair to medium end of the spectrum and the bike slid along the concrete bridge for a number of metres.  Apart from one Siskiyou pannier being slightly scuffed there was no damage. 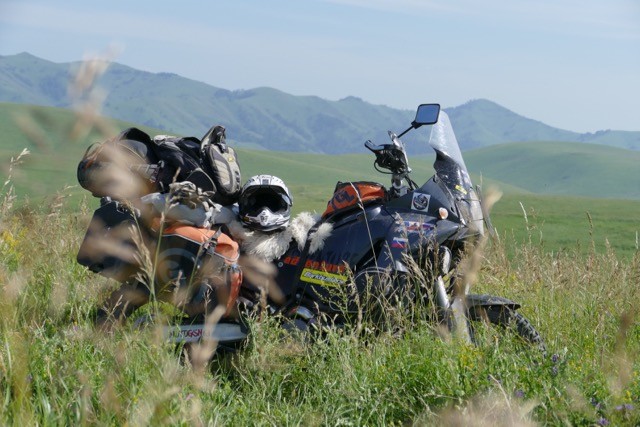 PIC 2: My KTM990 having a rest in the deep grass of the Altay Mountains, Siberia, Russia.  Siskiyou panniers, Fandango Pro Tank Bag and Columbia Dry bag were a great combination for this challenging 17,000 kilometres where we rode an average of 900 kilometres per day.
HIMALAYAN MOUNTAINS, KASHMIR, INDIA, 2016
I’m just back from riding the Himalayan Mountains in Kashmir India.  For this ride my mate, Nugget and I rented bikes and we had to pack really light.  I chose to go with my Columbia Dry Bag and Fandango Pro Tank Bag,  that fitted perfectly on my Bajaj 220 cc Pulsar road bike.   Nugget rode the new Enfield Himalaya and he took a Great Basin saddle bag and Fandango Tank Bag.   As expected the GL soft luggage didn’t let us down,  kept our gear dry and dust free.  It was the ideal soft luggage set up for this ride. 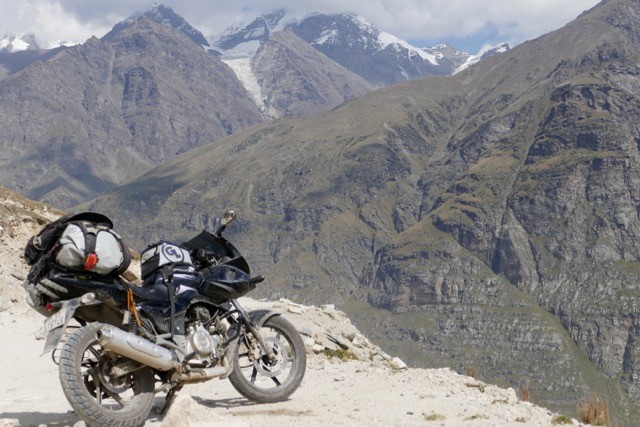 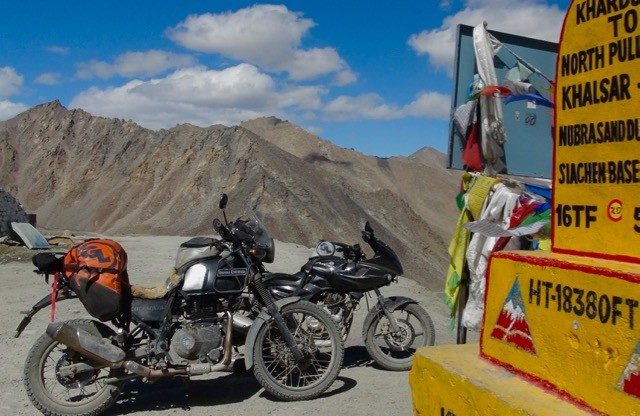 PIC 4: Our bikes on the world’s highest road pass at 18,380 feet.  Nugget’s Enfield Himalaya sporting a Great Basin saddle bag and Fandango Tank Bag and my little Bajaj in the background.
Now if you want to see Giant Loop products being used in real world adventures, please head to Motorcycle Adventure Dirtbike TV on youtube!
David Darcy is a supported rider for Giant Loop.